In the last years, endoscopic surgery has become the state-of-the-art modality to manage most conditions that fall under ENT medicine.

Using mostly this technique, sinus and nose conditions can be treated. The sinuses are facial cavities that are located around the nose. They are divided into groups according to location: frontal, ethmoid and sphenoid. They contain air and communicate with the nose through small openings, from where the physiological or pathological fluids they produce are released.

Endoscopic surgery of the sinuses is termed Functional Endoscopic Sinus Surgery and is performed through the nose without external incisions using thin, inflexible endoscopes and a high-resolution camera. At the same time, Surgical Navigation-Computer Assisted Surgery technology is utilised; in this way, we can visualise the thin end of the special tools in real time during surgery by using the pre-operative CT scan of the patient performed at 3 levels, thus increasing safety and efficacy of the procedure.

Endoscopic surgery tools are highly specialised, including Microdebrider or Shaver, which facilitate a bloodless and faster removal of tissue than lasers, preventing damage caused by heat.

The following conditions are treated by endoscopic surgery:

The well-known nose polyps that block the nose and cause difficulty in breathing. We now know that these polyps are formed usually in the sinuses thereby blocking the nose. If they are locally removed from the nose the can form back quickly. Proper management consists in the complete and radical resection of these polyps from their origin, which we identify by nose endoscopy and 3-level special CT scan. Together with the nose, sinuses with polyps are thoroughly cleaned up, and by expanding their physiological openings they come into better contact with the nose so as to be functional after the surgery and fully checked at the outpatients department.

Nowadays the term that is used internationally is chronic sinusitis and depending on the sinus group affected we divide this condition into the less known ethmoiditis, sphenoiditis and frontal sinusitis. Chronic sinusitis, when not treated with medicines, needs endoscopic surgery, which gives us the change to clean up with accuracy all affected sinuses and make them communicate with the nose without unobstructedly. In this way, the patients is relieved from the symptoms and new inflammation is prevented.

They are usually removed using MIST, easily and effectively.

The modern way to remove these tumors is by endoscopic surgery. When performed by experienced hands, results can be as good as open surgery, but avoiding external incisions and scarring.

In the same way, the endophytic or reversed papilloma and the small malignant tumors of the nose and the sinuses can be removed.  Moreover, we can perform post-operative assessment in the outpatients department in case of relapse.

This inflammatory condition is caused in the eye socket mainly following an acute sinusitis. Its symptoms are very severe and necessitate emergency surgery, because there is risk of eyesight loss. It can be successfully performed endoscopically yielding impressive results.

Empyema of the frontal sinus

It can occur after an acute inflammation of the frontal sinus, when its physiological opening has been blocked. It required immediate endoscopic drainage, because inflammation can reach the eye socket thereby putting eyesight in danger or it can reach the meninges and the brain thereby causing meningitis or brain abscess.

The nasal concha is a normal anatomical part of the nose interior. In pathological situations, it can overgrow and create difficulty when breathing from the nose, which can be treated effectively using surgery that is called conchoplasty. This consists in the controlled reduction of the nasal conchae to the desirable size that then remains constant throughout the patient’s life. Only through endoscopic surgery can the nasal conchae be fully controlled especially in their posterior region thus accomplishing an excellent result.

Apart from the above conditions, endoscopic surgery takes important part in the management of ear and throat conditions, in which cases advanced micro-surgery using state-of-the-art surgical microscopes and lasers when needed plays a dominant role.

Nowadays a stapedotomy is almost always performed consisting in replacement of the stapes bone using a special piston with a width of 0.4 – 0.6 cm. This is a very specialised microsurgical operation, which needs absolute accuracy and special skills by the surgeon. It is performed using the high magnification afforded by the microscope. We need very special tools, surgical high-accuracy devices and lasers. The successful outcome of this operation is almost always certain and hearing is restored to normal levels.

In our centre apart from the conditions that need microsurgery or endoscopic surgery the following procedures are also performed:

The Athens Bioclinic responding to patients’ needs of high-quality services has created a special Centre for micro-endoscopic ENT surgery, which is equipped and organised at very high standards. The extensive and long experience of surgeons using this equipment as well as the solidly-trained nursing staff are the best guarantee of excellent treatment outcomes following the latest international specifications. 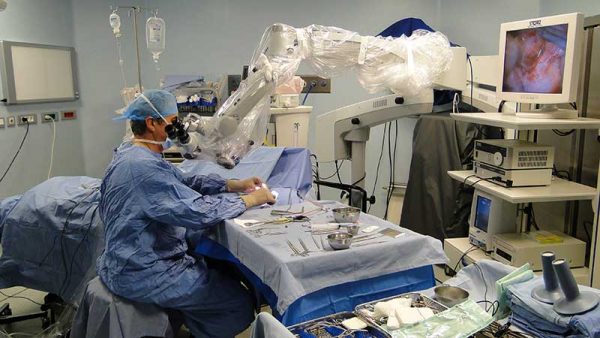 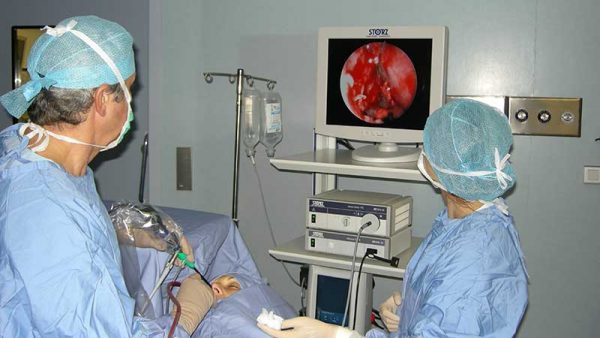